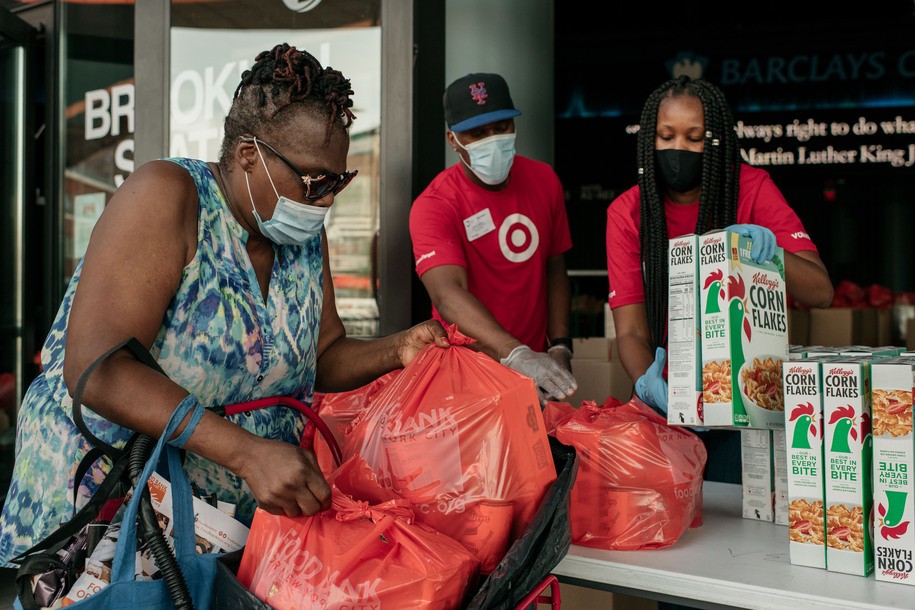 
The all-volunteer-run group serves Ocean Hill, Brownsville, East New York, and Cypress Hill. While initially they were just supporting around 10 to 20 households a day, the need for its services has grown rapidly; the group now provides meals for roughly 100 households per week.

“It all became so real so very quickly,” said Taitt in an interview with Prism, “and almost to the point where we weren’t able to get to people fast enough if we didn’t have the proper infrastructure and resources from the community that we were able to get.”

The spike in demand amongst East Brooklyn residents is emblematic of the rising food insecurity throughout New York City and across the country. Food insecurity is defined as not having enough income to afford or access a healthful diet for an individual and their family and as Jerome Nathaniel, associate director of policy and government relations at City Harvest, says, it is also something that is “involuntary and reoccurring.”

When looking at the dimensions of food insecurity, Nathaniel says, anti-poverty and anti-hunger groups use what is known as a “self sufficiency standard,” or the amount of income that a working family requires to meet their minimum basic needs in a particular locality.

“It also looks at other expenses that an individual might need to balance when they’re thinking about their food budget,” said Nathaniel. “So it looks at the cost of transportation, the cost of rent and housing, child care, as well as health care, and when you look at all of those variables—quite often for an individual that’s facing food insecurity those are more like fixed costs. They might approach it as thinking rent is something that needs to be paid, they need to figure out child care, they need to figure out transportation so that they can get to work—and then food turns into this sort of elastic expense.”

Covering those fixed costs can push a food insecure household toward the decision to skip meals. That constant analysis of what must be sacrificed impacts predominantly Black and brown households in lower-income communities most.

An unprecedented surge of a long-standing problem

With the holiday season approaching and cases of COVID-19 higher than ever, the need for East Brooklyn Mutual Aid has grown in tandem. Taitt says that requests have tripled in the past month leading from supplying $1,000 worth of groceries per week to $3,000. The group is 100% crowdfunded, and needs to raise $10,000 to make it through the end of this month. As New York City schools close once again due to COVID-19 spikes, Taitt estimates that demand for his group’s work will only continue to rise.

While New York City was seeing marked improvements in lowering hunger rates since the Great Recession, a staggering number of New Yorkers were experiencing hunger before the pandemic. Organizations like City Harvest have been addressing those concerns since the early 1980s by “rescuing” food: collecting leftover produce from city-based grocers and restaurants that is safe to eat but would otherwise be thrown away. City Harvest’s fleet of 24 food trucks then delivers this produce to food banks and shelters across the city.

The pandemic has both heightened the need for City Harvest’s services and decreased their capacity. That’s something Seth Cowan, City Harvest’s manager of agency operations, has been attempting to maneuver around since early spring.

City Harvest works with a network of 400 soup kitchens, food pantries, and other community food programs across the city. In April, 96 of them closed because they are largely run by teams of elderly volunteers who are most vulnerable to COVID-19.

“A lot of agencies had to start from scratch,” Cowan told Prism, “and they looked to us to find solutions for that so that they could get their programs back up and running.”

With the help of City Harvest, which has aided in providing PPE and coordinating volunteer pools, 76 of those agencies have reopened, but organizations are still strained. Cowan notes that City Harvest is operating at 95% more than they ever have before, rescuing 300,000 pounds of food per day from their partner groups. In an attempt to fill in the gaps and address areas of the city that were not being met with their existing network of food agencies, City Harvest has created 32 different emergency relief sites. They also have worked with restaurants to provide boxed cooked meals. To address the increase in demand and the ways long lines can compromise social distancing protocols, the group is also working with Plentiful, a web-based application that will allow individuals to make appointments to schedule their food pickups.

While these pivots to City Harvest’s operations will help meet some of the city’s needs, it will take large-scale legislative action to secure the necessary resources to combat widespread food insecurity. Cowan noted that many organizations both within New York and across the country have relied upon government assistance, namely the USDA’s Farmers to Families Food Box Program. That program is set to expire on Dec. 31. Unless an extension is granted, Cowan worries that “there will be a sharp decline in resources made available.”

Nathaniel also told Prism that the country is well past due for another comprehensive federal relief package. He considers this to be an immediate need given how expansive the HEROES Act was.

“I’m not sure people realize how comprehensive it was, but it included funding for the MTA to avoid fare hikes, it included $100 billion to support rental assistance to avoid evictions, and in the anti-hunger world very specifically, it would have increased SNAP, formerly known as food stamps, by 15%,” said Nathaniel. “It would have extended this program called Pandemic-EBT which provides about $125 a month to households with children if their school is closed or has any kind of educational interruptions during the course of the public health crisis, and it also would have extended the pandemic unemployment compensation package, adding an extra $600 to people’s unemployment benefits.”

Nathaniel says passage of another similar relief package would reduce poverty projections by 32% nationally and by 36% for Black and brown communities specifically.

City Harvest and Feeding America are currently active in protecting SNAP benefits as well as fighting against proposed policies that would weaken it or limit access to immigrant communities. This year, the group alongside other advocates were successful in combating new SNAP restrictions imposed by the Trump administration. The administration’s rule would have stripped some 70,000 New Yorkers of their SNAP benefits but was temporarily blocked by Congress.

While legislative interventions can create sweeping changes that are needed for an issue of this magnitude, some advocates like Taitt are adamant in their belief that only communities themselves can provide the type of support they need.

“Some of the electeds are right down in the trenches with us but from a government perspective, there are a lot of blanket systems that they expect to work around the country that just don’t,” said Taitt. “And what we realized is that we were able to get together and create community systems in each of our respective communities that worked for us and worked quickly and we were able to get to the need that was there faster. We haven’t had proper resources or an advocate on the ground to help us out. We’ve relied heavily on just our neighbors. We’ve learned that we definitely can do it better ourselves.”

That community-based support also allows local groups to tailor their services to meet the specific needs of their neighborhoods and address gaps others might not notice. For Taitt, that meant not just providing food to his neighbors, but ensuring that the produce is healthy and nutritious. Since May, East Brooklyn Mutual Aid has switched from supplying food from grocery chains to working with Brooklyn Packers, a Black-led, worker-owned cooperative grocery. The group, which also provides produce to other Brooklyn-based mutual aid funds, allows East Brooklyn Mutual Aid to purchase in bulk and stretch their dollar. It also offers a healthier alternative to what many food shelters typically provide.

“It was a priority of mine to get our neighbors off of the non perishable dry items that are just not healthy for us,” said Taitt. “We’re stocking them full of all of this canned stuff and dry stuff, and these are things that we need and that are great but there was a huge lack of fresh [items]—everything was coming in tinned and sealed. We deserve fresh, we deserve the best, and we fought to make sure that our neighbors got it as well.”

East Brooklyn Mutual Aid is still accepting both donations and volunteer support in order to remain in operation. While City Harvest primarily needs monetary donations, they will be accepting canned foods at State Farm locations, FDNY houses and NYPD precincts through Jan. 22 in partnership with The New York Daily News.

Trumpism, the Proud Boys, and the Extremist Allure for People of Color