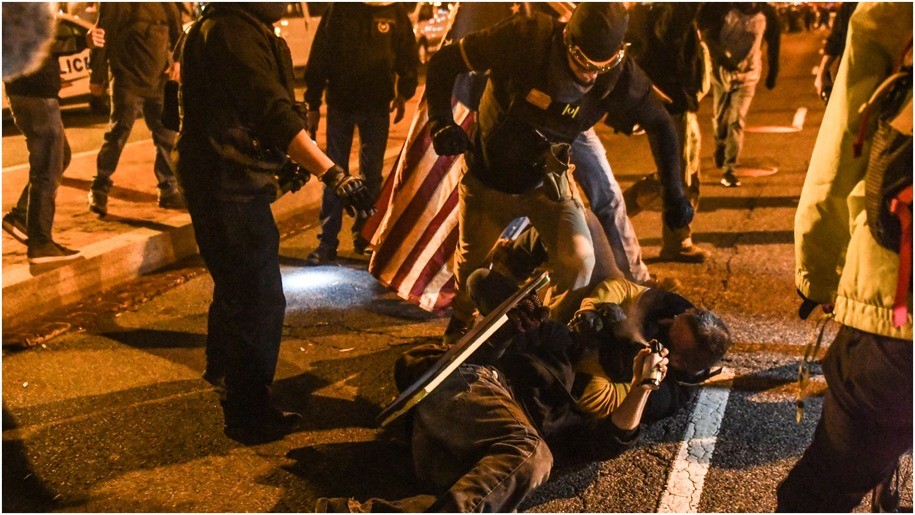 
“Today I saw proud boys attack legal observers, call people cockroaches, and mace and assault random people. They can call themselves whatever they want, but they’re the new KKK. They’re domestic terrorists,” Black Lives Matter protester Joshua Potash tweeted early Sunday. He also compared police reaction to the violence with their response to Black Lives Matter protesters and journalists in the wake of George Floyd’s death. Floyd, a Black man, was killed when a white Minneapolis cop kneeled on his neck for more than eight minutes on May 25. At least eight people were partially blinded the same day police went on a rampage targeting protesters on May 30. “I’ve been at BLM marches all summer and fall where people are attacked and arrested by cops just for standing in the street. Tonight in DC dozens of Proud Boys maced and attacked people and cops didn’t do shit,” Potash said in another tweet.

Victims of the violence endured potentially life-threatening injuries D.C. fire spokesman Doug Buchanan told The Washington Post. D.C. Police Chief Peter Newsham told protesters: “We’re doing the best we can.” He told the Post officers were deployed throughout downtown to keep Trump supporters and counterprotesters separated, but portions of the crowd seemed “intent on conflict.” By 9 p.m., 23 people were arrested and one person had an unauthorized Taser, police said. In total, two police officers were hospitalized with moderate injuries and six others suffered injuries of unknown severity, the Post reported.

Bree Newsome Bass, a grassroots organizer, asked in one tweet: “Is there a point at which all the people saying “I never thought this could happen” start listening to the people who’ve been saying for years that this was going to happen?” Author Wajahat Ali tweeted: “I can’t even imagine hundreds of armed Muslims burning flags, beating up people, stabbing people in the streets of the nation’s capital without dozens of folks being shot and killed by the police. Meanwhile it’s Springtime for Proud Boys and White Supremacy right now.”

You already know why the DC cops didn’t stop the Proud Boys last night. You know why nazi-friendly groups are allowed free reign in this raggedy ass country. You can stop pretending to be shocked now.

“The proud boys are domestic terrorists

The proud boys are domestic terrorists”

I didn’t see it happen, but hearing from DC Fire officials that two individuals were stabbed here outside Harry’s Bar. Ambulance transporting them away now. Police cleared the block after chaos broke out in the crowd and police ran into the scrum with OC spray. #DCprotests pic.twitter.com/KQutSC06vH

This is a Proud Boys Rally threatening our DEMOCRACY in DC Last Night.

You would be forgiven if you thought these pics were from an ISIS rally or NAZI Rally in 1936. pic.twitter.com/YXP9ZguTdJ

RELATED: 12 times Trump really did say that awful, racist thing you thought had to be fake news

Let’s give GOP Leader Mitch McConnell the boot! Give $4 right now so McConnell can suffer the next six years in the minority.

What to look for in a mirrorless camera?