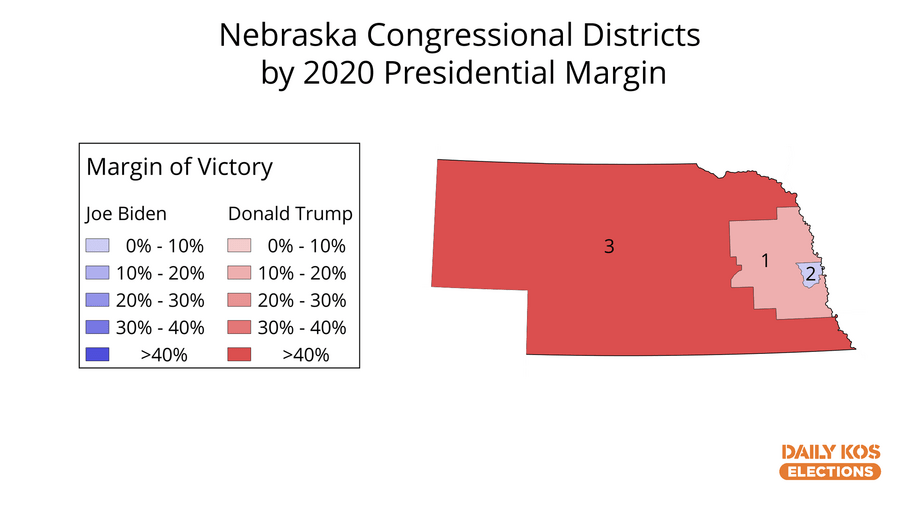 
The only other time this happened was in 2008, when Barack Obama likewise won the 2nd District despite losing statewide. Maine’s 2nd District also supported Trump while the state as a whole went for Biden, which makes this the first time in history that Nebraska and Maine have both split their electoral votes in the same election (Trump won Maine’s 2nd in 2016, too). Trump prevailed in Nebraska’s two other U.S. House districts without any trouble. You can find a larger version of our map here.

Despite the 2nd’s move to the left, Republican Rep. Don Bacon was able to fend off Democrat Kara Eastman 51-46. Eastman had held Bacon to a surprisingly small 51-49 victory two years before in a race that major Democratic outside groups bypassed, but both national parties spent millions here this time.

Bacon, though, worked hard to portray himself as a bipartisan figure, an effort that got a boost when he received a prominent endorsement from former Democratic Rep. Brad Ashford, whom he’d unseated in 2016. (Ashford had tried to regain his seat in 2018 only to lose the primary to Eastman, who then defeated the former congressman’s wife, Ann Ferlic Ashford, in this year’s contest for the Democratic nomination.)

Bacon’s win notably makes him the first Republican we’ve found representing a Biden district, though he won’t be the last. This is also not the first time that a Republican congressman has won in Omaha thanks to crossover voting. Back in 2008, Republican incumbent Lee Terry temporarily set his hardline image aside by directly appealing to “Obama-Terry” voters, whom he described as “people who want the right kind of change.”

The strategy worked, and Terry won reelection 52-48 as Obama was carrying the 2nd District 50-49, though he never again showed any concern for advancing “the right kind of change.” Despite his win under tough circumstances, however, Terry found a way to lose reelection during the 2014 GOP wave to Ashford.

Trump easily took the other two Nebraska seats. While Democrats showed some optimism over the summer about putting the 1st District, which is home to Lincoln and surrounding rural areas, into play, Trump’s 56-41 win was only a bit smaller than his 57-36 margin in 2016. Republican Rep. Jeff Fortenberry, meanwhile, turned back a challenge from Democratic state Sen. Kate Bolz by a larger 60-38. Trump also easily won Republican Rep. Adrian Smith’s sprawling 3rd District in the rural western part of the state 76-22, which wasn’t much different than his 75-20 showing four years ago.

Republicans will once again be the main player in the upcoming round of redistricting, but it’s not clear yet just how much power they’ll have. Nebraska’s unicameral legislature, which is formally nonpartisan but run by the GOP, offers lawmakers with an uncommonly strong filibuster. Republicans weren’t able to win the two-thirds majority it would need to overcome a Democratic filibuster aimed at stopping new maps (a job that would then likely fall to the courts), but the GOP retains the ability to end the filibuster rule with a simple majority.

How To Keep Fit In The New Year