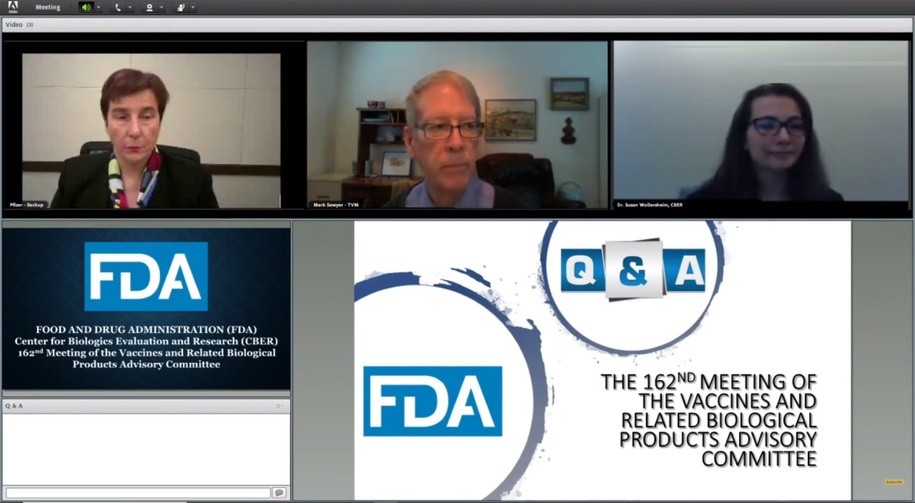 
Multiple concerns were expressed about the relatively small representation of specific groups in the trials. For example, American Indians were poorly represented in Pfizer’s trial, and while Black seniors were at a level that approximated their percentage in the nation, that still left them a relatively small pool within both safety and efficacy trials. Finally, the trial specifically left out some groups in early phases, including  people under 18 or over 85, and people with HIV or other immune related illness. Though the trial was later expanded, there were concerns about whether these groups were in the study for an adequate period of time to make any statement about efficacy or safety for these groups.

Pregnant women were excluded from the trial. It was brought up repeatedly that if healthcare workers are among those first to receive the vaccine, that includes a lot of women of childbearing age, including some who may—knowingly or unknowingly—be pregnant. A trial is planned that includes pregnant women, but this trial is several stages behind.

The public session brought several speakers who raised concerns about the vaccine from different angles, though none was outright against the release of the vaccine. Concerns were expressed not just about safety for people in the groups which had either not been tested, or which had been poorly represented in trials, but about the use of Emergency Use Authorization as compared to making the vaccine available under “expanded access.” Expanded access is how the FDA sometimes makes new drugs available for “compassionate use.” It generally requires more documentation both in determining who can receive the drug, and more follow up for post treatment response.

A large amount of discussion, both from public comment and within the FDA’s own discussion periods, concerned how to deal with patients in the vaccine trial who wanted to seek the actual vaccine once it was made available. Since trials are conducted “blinded,” with patients not knowing if they received the vaccine or a placebo, they could justifiably be concerned that they didn’t actually get the vaccine. It seems entirely reasonable to allow patients to seek access to a vaccine if it is available. On the other hand, if all the placebo patients ask to get the vaccine, then the trial loses its control group. In a trial that’s supposed to extend for the next two years, that’s a real—and pretty much unsolvable—issue. The answer appears to be that patients who ask can be “unblinded” will be allowed to receive the vaccine, but this won’t happen unless they ask and until the vaccine is actually available to the demographics of that patient. For example, a young patient not involved in healthcare would not be unblinded at a point when the vaccine was still not available to people in her age group.

During Pfizer’s portion of the meeting, they detailed the reasons for the vaccine design. The proteins targeted were selected because earlier attempts to create a vaccine for closely related SARS and MERS coronaviruses, targeting the protein the virus uses to attach to human cells proved most effective. Pfizer selected BioNTech’s mRNA technology because it had appeared safe in limited testing of cancer treatments, and it could be used to develop a vaccine very quickly and scaled up rapidly. While Pfizer emphasized the safety, it was clear that speed was a critical factor in the decision, with the move to production happening at the same time as early trials.

While Pfizer is introducing their vaccine as a two-dose treatment with equal injections happening three to four weeks apart, they also dedicated some time to reviewing the data on how the vaccine worked after only a single dose. While earlier reports had indicated that the vaccine was 52% effective after a single dose, the actual data was very interesting. Efficacy seemed to increase significantly about 12-14 days after the first injection, and the vaccine appeared to be highly effective after that point. Since Pfizer intends to conduct a second Phase 3 trial testing a single doser approach, this would appear to be encouraging data.

In the question and answer session, one of the FDA committee members actually asked whether there was really a need for the second dose, considering how flat the curve for infection was following that first 14 day period after the initial dose. Pfizer’s response was that the second dose appeared to raise the immune response and they were more confident that the vaccine would provide persistent protection following the second dose.

Possibly the most amazing thing that kept coming up during the day was just how short a period people were in the trial. The median period was around two months, but some of those in the reported data had been in the trial for just a single month. It’s an artifact of just how fast the whole process has moved, but it’s still a dauntingly brief period of time for follow-up before making the vaccine generally available. Pfizer intends to follow up for the next two years.

As might be expected, there was also extensive discussion of the issues that have come up during the administration of the vaccine in the U.K., including two cases of severe allergic reaction and four cases of Bell’s Palsy, a type of temporary paralysis that typically affects half the face. The clearest possibility comes from an action Pfizer took in recruiting for the trials: It specifically excluded anyone who had previously had an allergic reaction to any vaccine. But whether that means that people with other allergies are in the clear will have to wait for more analysis from the U.K. In the meantime, FDA officials have already prepared text to accompany the vaccine that warns against use by those with severe allergies, and instructs vaccine providers to be prepared in case someone exhibits an allergic reaction. Over 44,000 people participated in Pfizer’s trial, and they noted no allergic reactions, so it remains unclear what is behind the two cases in the U.K.

At the end of a long day, and with much batting the issue back and forth, the question of whether or not 16 and 17 year olds should be included looked to be a last minute sticking point. But committee members simply forced a vote, and the numbers were there to overwhelmingly approve the use down to age 16. As one board member noted, there absolutely are children who are having long term health damage from COVID-19, and there may be cases were a child represents a high risk patient. With the vaccine appearing to be so effective, it was hard to deny them that option.