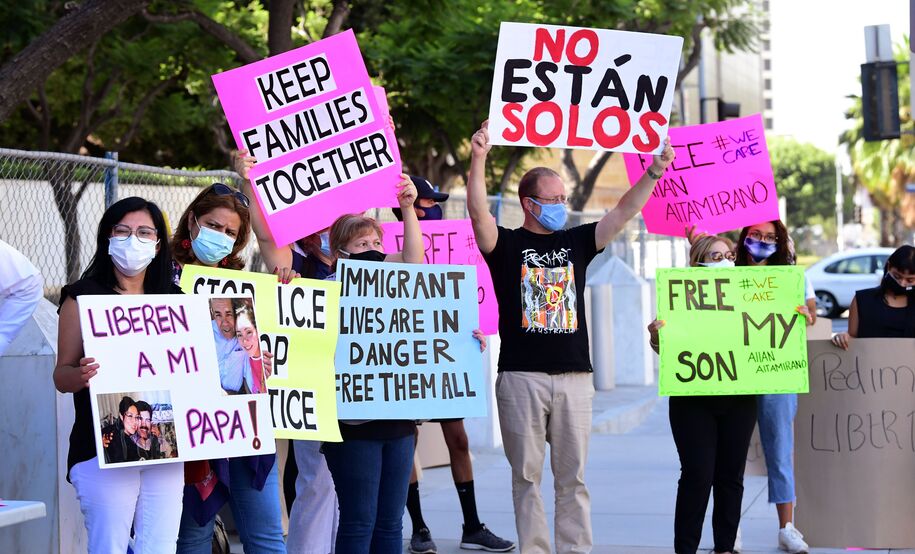 
From the start, immigrant rights advocates have called on ICE to release detained people amid the pandemic and allow them to shelter in their communities, saying in lawsuits that social distancing while in detention is impossible. But officials steadily refused as the in-custody caseload skyrocketed to over 7,300 cases to date. But, the report continues, “ICE’s failed response contributed to the spread of COVID-19 throughout the country.”

“We estimate that ICE detention activities were linked to an additional 245,581 cases from May 1st to August 1st,” the report said. In a release received by Daily Kos, DWN said “[t]hese cases were concentrated in multi-county economic areas where ICE facilities are located. If the cases linked to ICE were the reported caseload of a country, that country would have ranked 16th in the world by total cases, outranking Germany, France, and Canada.”

ICE’s refusal to release detained immigrants led to the agency’s deadliest year since 2005, with at least eight people in immigration detention dying from COVID-19, DWN said. “The number of those who have died due to COVID-19 contracted at ICE facilities may, in fact, be higher,” the report continued. “It is possible that a number of people contracted the virus in detention, were not tested, and then passed away after being released from detention or deported.”

The agency’s disregard for detainees’ lives was at the center of one federal judge’s anger just days ago, in a ruling concerning a privately run immigration prison in California where at one point more than half of detainees had tested positive for COVID-19.

“From the start of the public health crisis until now, the conduct of the key ICE and GEO officials in charge of operations at Mesa Verde has been appalling,” Judge Vince Chhabria said about ICE and private prison profiteer GEO Group. “These officials knew that they needed a clear and detailed plan to minimize the risk of an outbreak (and to contain an outbreak if one occurred), but nine months later they still have not created one.” As DWN also notes in its report, internal emails obtained through the lawsuit showed ICE and GEO Group rejected a plan to test all detained people at the facility basically because they didn’t want to be bothered with logistics.

“ICE has even been blamed for spreading the virus internationally by deporting people who were detained in facilities with active COVID-19 cases without testing them,” DWN continues. “People deported to countries including India, Haiti, Guatemala, and El Salvador tested positive shortly after their deportations.”

ICE’s refusal to budge will only continue to result in more sickness, more cases, and possibly more death. It must be incumbent upon the incoming administration to use its authority to change this. “The immigration detention system is cruel and unnecessary,” DWN said in its conclusion. “Its defects are only heightened during a global health crisis. People navigating their immigration cases should be able to do so with their loved ones and in community, not behind bars. The only just and long-term solution is to free all people from detention.”