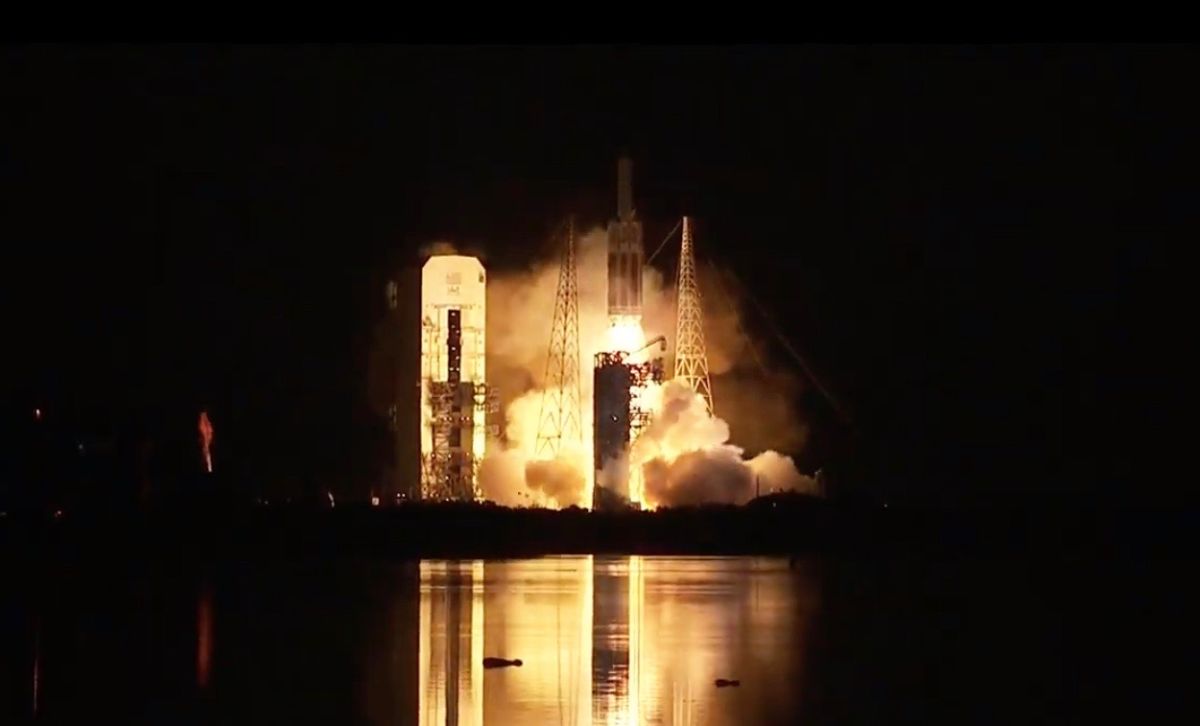 The launch went off without a hitch following months of delays that included hardware issues and problems with launch pad infrastructure. Originally slated to lift off Aug. 26, the NROL-44 mission was first pushed back 24 hours per the customer’s request. Then, on Aug. 27, the rocket was fueled for launch, but the countdown was halted due to an issue with a critical ground pneumatics control system. Another attempt on Aug. 29 was aborted at the last second.

Plans to launch the mission on Sept. 26 were scuttled by an issue with the launch pad’s swing arm retraction system. Weather pushed the flight back again to Sept. 29, which was followed by an automatic abort on Sept. 30 when the rocket’s onboard computer detected a sensor fault. That issue resulted in a multi-month delay.

Related: The history of rockets

ULA is currently developing its next-generation launcher, the Vulcan Centaur, and as such is in the process of phasing out its Atlas and Delta rocket families. Only four Delta IV Heavy launches remain, with two scheduled to fly from California and two additional missions blasting off from the Cape sometime before the end of 2023.

As evidenced by the recent series of delays, a Delta IV Heavy launch is nothing short of dramatic. The behemoth puts on quite the spectacle as it climbs to orbit, literally lighting itself on fire seconds before leaving the pad. Due to its sheer size and weight, the rocket looks majestic as it climbs and appears to slowly leave Earth behind.

Powered by three common core boosters and a cryogenic second stage, the Delta IV Heavy packs quite the punch, producing more than 2 million pounds of thrust at liftoff. The triple-booster rocket is fueled by a combination of super-chilled liquid hydrogen and liquid oxygen.

Liquid hydrogen is incredibly flammable, so the rocket’s sparkler-like igniters burn off any excess gas 14 seconds before liftoff. This completely normal part of the launch produces an iconic (and dramatic) fireball that is unique to the Delta.

At T-7 seconds, the starboard booster engine ignites, followed by the center and the port engines two seconds later. The staggered ignition is designed to mitigate the fireball produced by the rocket’s hydrogen-burning engines.

Shortly after liftoff, the vehicle conducts a “pitch over” maneuver, orienting itself on the proper flight path and reducing stress on the vehicle during flight. Just under four minutes after liftoff, the two side boosters are jettisoned and the center booster and upper stage throttle up for approximately 90 seconds before the main engine cuts off.

From this point, it’s all up to the upper stage. The rocket’s nose cone, known as the payload fairing, is jettisoned 6.5 minutes into flight, but, because NROL-44 is a mission for the NRO, which operates U.S. spy satellites, the exact time and location of payload deployment will not be disclosed.

The road to launch

The NROL-44 launch campaign really started to materialize last summer, when the rocket’s three common core boosters arrived at ULA’s facilities here at Cape Canaveral. The trio was integrated with one another while the cryogenic upper stage was attached to the center stick. The upper stage is powered by a single Aerojet Rocketdyne RL10B-2 engine, which propels the secret payload to orbit once the boosters have separated.

A few months later, in November 2019, the rocket was rolled to the Vertical Integration Facility at Space Launch Complex-37 and waited for its payload to be mounted on top. But before that could happen, ULA engineers needed to put the rocket through its paces to ensure that launch day would run smoothly.

In January 2020, ULA completed prelaunch testing, which included a “wet dress rehearsal.” The vehicle was loaded with fuel, and crews practiced launch day activities up to ignition. The rocket was then detanked and tucked inside the mobile service tower to wait for its payload, which was installed on July 27.

Today’s flight marks the sixth mission this year for ULA and the 142nd successful launch for the company since its inception in 2002. It’s also the 12th Delta IV Heavy to fly. To date, eight of the rockets have carried payloads for the NRO. Other notable missions include sending NASA’s Orion capsule on a test flight to Earth orbit in December 2014 as well as launching the agency’s Parker Solar Probe in August 2018 on an expedition to explore the sun.

It is also the 385th rocket in the Delta family to fly since the Thor-Delta in 1960. To honor that heritage, ULA CEO Tory Bruno tweeted an image that was painted on the rocket. The image depicts the number 385 emblazoned onto the side of the rocket, inside a triangle, which symbolizes the letter Delta in Greek. All future Delta IV Heavy rockets will feature a variant of this badge, Bruno said.

Another great idea from you guys… implemented. Tonight’s launch is the 385th in the Delta Rocket family, beginning with Thor-Delta in 1960. Each of the 5 remaining DeltaIV-Hvy’s will carry this badge. pic.twitter.com/cq2rjFJ34oAugust 26, 2020

There are four more remaining Delta IV Heavy missions that will launch national security payloads of their own sometime before 2023. The first of those is estimated to fly early next year from Vandenberg Air Force Base in California. After that, there will be one additional mission from California as well as two more missions from the Cape.

The Delta IV Heavy is the preferred launch vehicle of the NRO, as the rocket is essentially perfect for its clandestine cargo. The reconnaissance payloads have historically been incredibly bulky and heavy, much like launching a school bus, and are designed in a way to fit specifically with the Delta IV Heavy.

That’s because ULA uses a vertical integration approach to attach and integrate payloads with its rockets. This technique is perfect for the NRO; its satellites are designed to be mounted on top of a rocket while it’s in a vertical position, as opposed to horizontal integration practices.

But the Delta IV Heavy isn’t the only heavy lifter on the market. SpaceX also has its own massive rocket called the Falcon Heavy.

SpaceX has said that it will offer more flexible practices going forward, including employing new vertical integration methods as well as producing a larger payload fairing for military missions.

That could help it snag more launch contracts. In 2018, the Falcon Heavy nabbed its first military contract from the Air Force, worth a cool $130 million, and is scheduled to launch that military payload next year. But that’s not all. The Pentagon recently selected both ULA and SpaceX to share launch duties for its future military and NRO missions. The duo beat out competitors Blue Origin and Northrop Grumman, each of which is developing its own rocket.

ULA received the lion’s share, securing 60% of the missions through 2027, while SpaceX will launch 40%. It’s unclear if those missions will launch on SpaceX’s Falcon 9 or Falcon Heavy, but ULA’s portion is expected to employ the company’s next-generation launcher, the Vulcan Centaur.

A rocket in 3D

Just before the original planned liftoff date of NROL-44, in late August, ULA projected a dazzling display of its history and future for its employees, VIPs and a few members of the media onto the rocket as it sat, tucked inside its mobile service tower (MST). The video project was three years in the making, and showcased the company’s past, present and future.

“We are dreamers inspired by possibilities not yet imagined, believers driven to harness the potential of space,” the narrator said as a stellar series of rocket images streamed across the MST.

This was the first time 3D mapping had been projected on an actual rocket. According to ULA officials, the project required many, many approvals, but in the end, the customer was really excited about it.

“The Delta IV Heavy is the largest vehicle in ULA’s fleet and is our nation’s proven heavy lifter,” Tony Taliancich, launch operations manager at ULA, told Space.com. “It has a legacy of successfully delivering payloads for the U.S. Space Force, National Reconnaissance Office and NASA.”

Taliancich explained that ULA’s launch services have been instrumental in saving lives, exploring the universe and connecting the world. So the new video was a way to highlight the company’s accomplishments and goals while also giving a salute to space exploration.

“To tell a 3D projection story about the industry, national security space, and the future of space exploration, we needed a really large canvas — and the Delta IV Heavy certainly delivers,” he said.

The NROL-44 mission is the 30th mission ULA has launched for the NRO. The company’s other launches this year include the robotic X-37B space plane as part of the first official mission for the U.S. Space Force, as well as the Mars Perseverance rover for NASA on July 30.

No possibility of Pakistan being blacklisted by FATF, claims Hammad Azhar

Study: internet shutdowns cost India $2.8B in 2020, more than double the losses in 2019, and they accounted for about 75% of the $4B lost worldwide (Archana Chaudhary/Bloomberg)

A British Airways plane comes in to land behind a tail fin at Heathrow Airport in London. On Friday, the

ABIDJAN, Ivory Coast (AP) — Ivory Coast on Friday became the second country in the world to receive a shipment