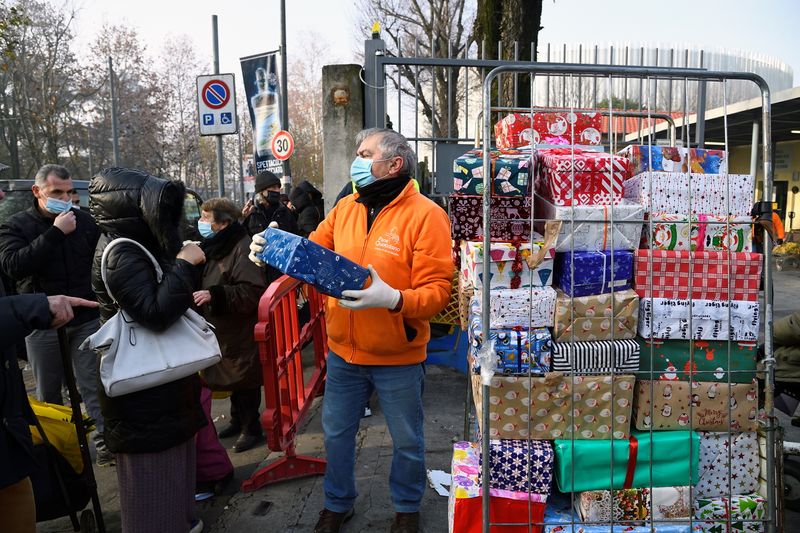 © Reuters. Queues of people waiting for food handouts in Milan

MILAN (Reuters) – Long queues have been forming outside food banks and help centres in Italy’s financial capital Milan as the economic devastation caused by the coronavirus has deepened before Christmas.

As case numbers surged after the summer, Italy – the first European country to be struck by the pandemic and among the worst hit – has seen its stagnant economy dealt a blow by lockdowns to try to halt the spread of COVID-19.

“During this period of the pandemic, the numbers have gone up,” said Luigi Rossi, vice-president of local aid group Pane Quotidiano, as a queue stretched down the block outside the centre in the south of Milan.

“We certainly believe that the more this crisis goes on, the more there will be.”

Even in prosperous Milan, which had been riding a major property boom before the pandemic, the crisis has bitten deeply as large parts of the economy have come to a halt.

Many who had been just about managing have been forced to ask for help in a city that has prided itself on being Italy’s economic motor and an exception to the malaise that has haunted the rest of the country for decades.

“There are so many people like me. It’s the new poor,” said Alberto, 66, who did not want to give his last name.

With the trade fairs that contributed heavily to Milan’s pre-crisis economy now closed, he has been out of work and has been coming to the centre for the past five months.

“I’ve still got to pay the rent, I’ve got to buy food and even though my partner is working, it’s not enough.”

Like the centres run by other charitable groups, Pane Quotidiano, which has operated in Milan for more than a century, has been flat out, open 7 days a week from 9 a.m. to 11 p.m. and handling an average of 800 people a day.

While the government has imposed a firing freeze and offered support to companies furloughing workers, many have complained of long delays in getting payments. For the army of home carers, cleaners, restaurant staff and others employed unofficially and paid in cash, there has been no support at all.

“How can you get by?” asked Maria-Rosa Mamone, 76, who came to the centre to get food and a Christmas present for her grandchild. With three people at home and 600 euros ($700) in rent to pay every month, she is struggling. “At least I can come here. There’s everything here, bread, milk…” Biden takes action on immigration on day one

OnePlus teases the launch of new device, possibly the first fitness tracker by the company; Details

7 Brands to Shop For a Fresh Start This Spring