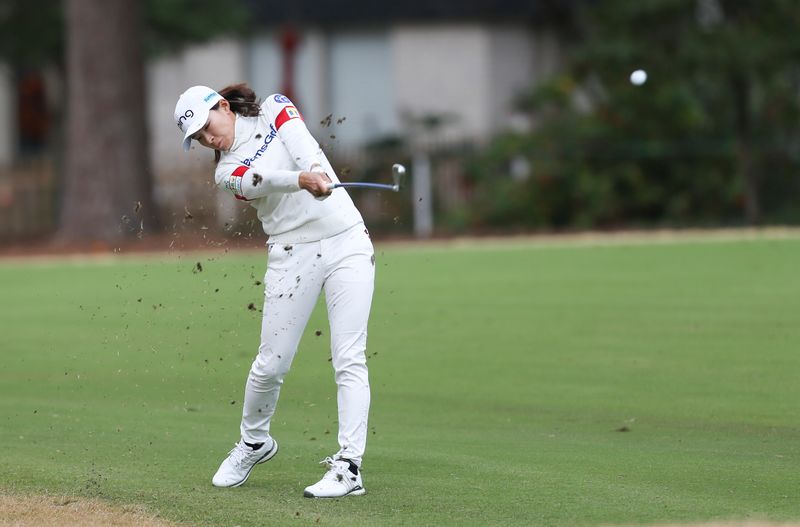 (Reuters) – Overnight leader Hinako Shibuno of Japan put in her shakiest round yet at the U.S. Women’s Open on Saturday but still managed to maintain a one stroke lead heading into the final round of the major championship.

The 2019 British Open champion bookended her trip around the Champions Golf Club in Houston with two bogeys en route to a third round three-over 74 to sit one shot clear of American Amy Olsen (71) heading into Sunday’s finale.

“I was a little shocked that I dropped a couple of shots,” said the 22-year-old Shibuno, who is playing in her first U.S. Open. “I want to do my best tomorrow and play as I normally do.”

She admitted that the bright lights of the championship got to her. “I myself was very nervous,” she conceded.

Olsen found her stride as the day progressed, mixing three bogeys with three birdies to keep her hopes of a first major title – and first win on the LPGA Tour – alive.

“Major championships, especially the U.S. Women’s Open, are not easy. It was really a grind out there today. I got off to a bit of a rough start but finished strong, so that’s a positive.

“Anything can happen tomorrow.”

South Korea’s Kim Ji Yeong2 had the best round of the day, a four-under 67 in a round that ended with a chip in for birdie and a share of third place with Thai Moriya Jutanugarn (72).

The shot of the day belonged to another South Korean, Chella Choi (75). She launched her tee shot on the par-three 12th and after a bounce and a roll her orange ball was in the cup for the third ace of this year’s event and 30th in tournament history.

With rain forecast for Sunday, the LPGA announced that the final round would start at 7:45 a.m. local time from the first and 10th tees of the Cypress Creek Course.

The U.S. Women’s Open, the oldest women’s golf major in its 75th year, was rescheduled from June to December due to the COVID-19 pandemic and is being held without spectators.

(This story corrects spelling of name in headline) 5 Simple Life Hacks Anyone Can Manage