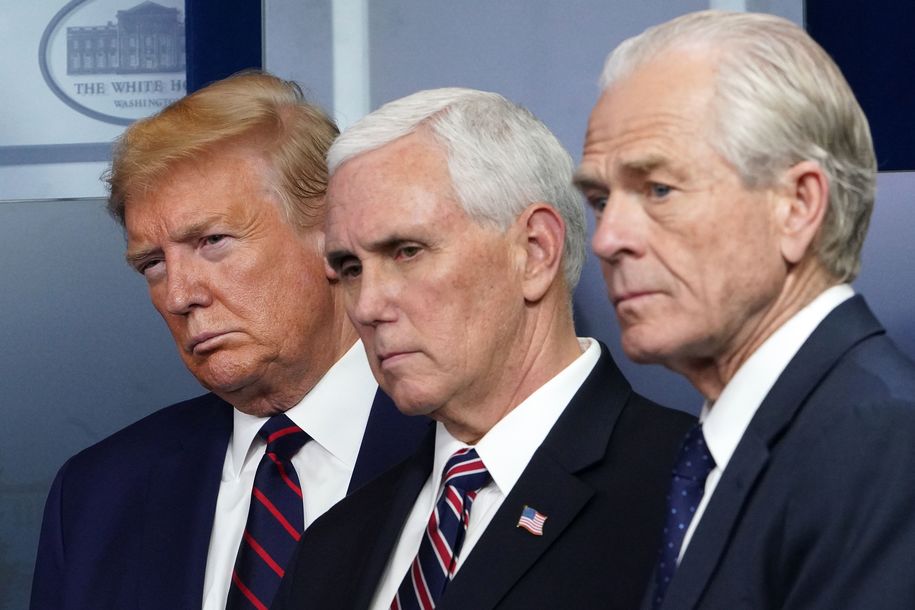 
This lasted only a few hours before Trump‘s Twitter account walked back the news, with a tweeter who sounded not much like Trump announcing: “People working in the White House should receive the vaccine somewhat later in the program, unless specifically necessary,” and that “I have asked that this adjustment be made. I am not scheduled to take the vaccine, but look forward to doing so at the appropriate time. Thank you!”

Well that is not Donald Trump writing, that’s for damn sure. Donald Trump does not use words like that, or proper capitalization, and certainly does take to Twitter to announce that he has “asked” for an “adjustment” rather than, say, “ordered” something be “shut down!!!” So that’s a bit of minor intrigue.

So either the Trump White House, which has relentlessly played down the dangers of the pandemic and which continues to spread the virus prolifically via the combination of mask aversion and the refusal to cancel in-person events featuring dozens or hundreds of guests, realized that the optics of redirecting vaccine shipments to Team Donald Trump looked particularly crappy even for them, or Donald and/or a Donald devotee got wind of the plan and got personally outraged because a scurry to vaccinate White House staff very much does not square with the White House’s policy of pretending that the pandemic is of no particular danger to anyone.

Oh, but there’s another catch here: The Trump White House lies prolifically about everything, all the time, and there’s no actual reason to believe that they truly are releasing those vaccines back to prioritized workers as opposed to simply lying about it. They are absolutely that dishonest, and every one of us knows it.

In any event, an irony here is that there are very good reasons to vaccinate top government officials with particular speed now that the vaccines are finally being distributed. Ensuring that top national security and economic officials are not sidelined in large numbers due to pandemic infections is, at least in principle, a true national security concern. It is likely that a Biden administration will prioritize vaccinations for top officials for that very reason.

On the other hand, there is something undeniably sketchy about redirecting initial vaccine doses to a crowd that continues to willfully expose itself to the virus being vaccinated for, which has shown absolute contempt for safety measures, which has encouraged their followers to rebuff the same, and does all of this solely because the delusional man-child they call their leader becomes irate if he sees an underling undermining his own message that Americans need not worry about the pandemic raging around them.

Shouldn’t the first doses of the vaccine at least go to people who have been trying to avoid the virus?

And what is the point of inoculating specifically those closest to Trump when Trump has already gotten and recovered from the virus and is ostensibly “immune” to further infection? Wait—I know this one. It’s because even though Trump himself may be in no particular danger, anyone and everyone who meets with Trump regularly is in particular danger of catching the virus because they meet with all the other advisers that meet with Trump regularly, and the virus has spread through that population so many times already that it’s a wonder there’s anyone left to infect.

The Trump team is evidently devoted to making sure all remaining administration tasks and duties are bungled, controversial, or merely farce; it stands to reason that they would flip-flop mercilessly on whether to vaccinate top officials with haste or pointedly not bother. It’d be stranger if it weren’t another muddled mini-fiasco.

Time to put Bonds and Clemens in the Hall of Fame, because my ballot is about numbers, not punishment