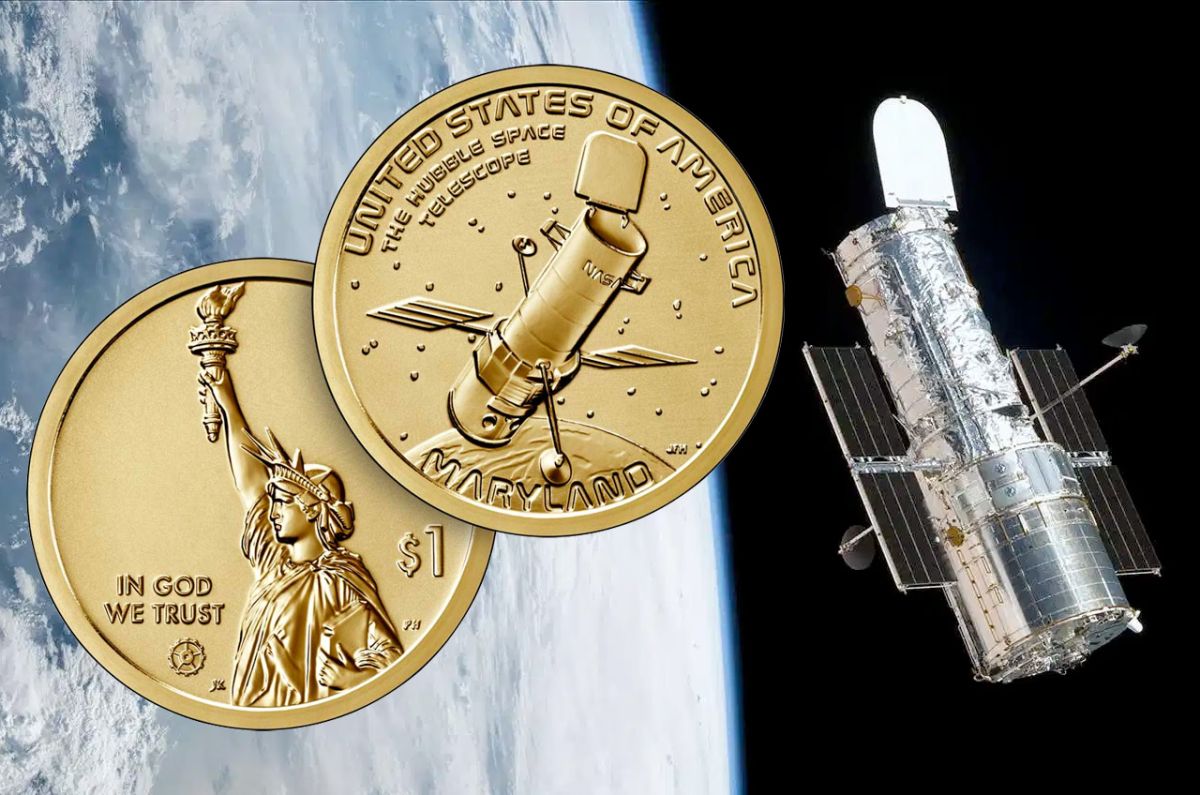 
The Hubble Space Telescope stars on a new U.S. coin in celebration of the observatory’s 30 years as a symbol of invention and ingenuity.

The United States Mint is starting sales of the Maryland American Innovation $1 Coin on Monday (Dec. 14) with rolls and bags of the new golden dollar. The multi-year American Innovation series commemorates the pioneering efforts of individuals or groups from all 50 U.S. states, the District of Columbia and the U.S. territories. The Hubble Space Telescope is managed from sites in Maryland, including NASA’s Goddard Space Flight Center in Greenbelt and Space Telescope Science Institute in Baltimore.

“We are proud to share this new $1 coin with our fellow Marylanders and the nation, highlighting our state’s contributions to expanding our knowledge of the universe,” Maryland Governor Larry Hogan said in a statement.

Named for American astronomer Edwin Hubble, the Hubble Space Telescope was deployed into orbit by NASA’s STS-31 crew aboard the space shuttle Discovery in April 1990. Three years later, the first of five servicing missions corrected a flaw in the telescope’s primary mirror, enabling the start of three decades of discoveries.

“The Hubble Space Telescope is an important research tool that provides critical information about the universe, which has led to many scientific discoveries,” said David Ryder, director of the U.S. Mint. “Data transmitted by Hubble has helped refine estimates of the age of the universe, trace the growth of galaxies, identify and study planets, identify black holes and observe stars.”

The Maryland American Innovation coin’s reverse, or tail’s side, depicts the space telescope orbiting Earth, surrounded by a field of stars. NASA’s recently-restored logotype, known as the “worm,” is included on the telescope’s body on the coin, as it appears on the real observatory.

The inscriptions “United States of America,” “The Hubble Space Telescope” and “Maryland” on the coin are rendered in the same font as the NASA worm.

The design was created and sculpted by Joe Menna, chief designer at the Mint, who has had a lifelong interest in space exploration.

“For me, it was a really exciting thing to do, just as with previous NASA-related coins. Space is a big passion of mine and has been since I was a kid, so it was really great opportunity,” said Menna in a video interview released by the Mint.

The obverse, or head’s side, of the coin, which is common to all of the coins in the American Innovation series, features a representation of the Statue of Liberty.

The bags and rolls of the Maryland American Innovation $1 coin, featuring the Hubble Space Telescope, are uncirculated and are produced at the Mint’s Philadelphia and Denver facilities. Beginning at noon EST (1700 GMT), the coins will go on sale from the Mint’s website in rolls of 25 coins for $34.50 or in bags of 100 coins for $117.50.

The Mint also plans to offer individual, reverse-proof coins, packaged in a four-panel envelope with information about the coin and its inspiration, the Hubble Space Telescope, on Dec. 30. The coins in these sets will each feature a frosted background with design elements polished to a mirror-like finish. The Maryland American Innovation 2020 $1 Reverse Proof Coin will sell for $11.50 each and be limited to 50,000 sets.

Maryland’s coin is the second entry in the American Innovation series to feature a space or astronomy theme. The first, issued for Delaware on Nov. 7, 2019, honored astronomer Annie Jump Cannon, who invented a system for classifying the stars that is still in use today.

What will Prince Harry and Meghan Markle’s royal baby’s name be? Here are some bookies’ early favourites

An NGO report has found there were 1,172 violent acts against healthcare workers globally in 2020, with over 400 incidents