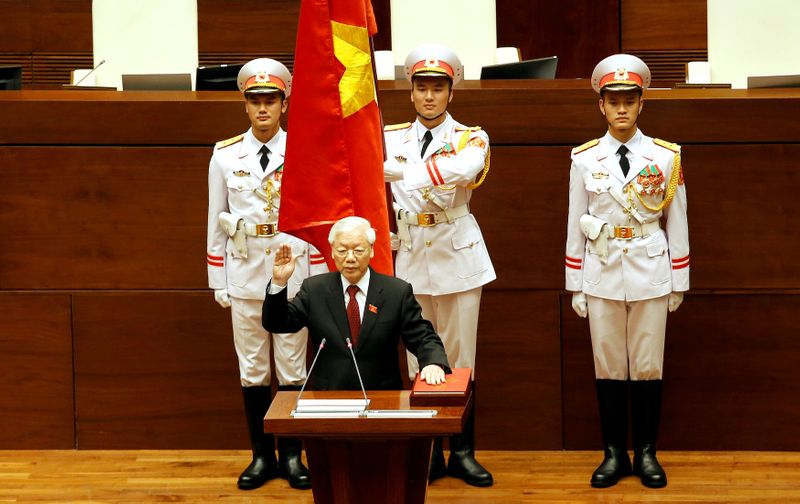 HANOI (Reuters) – As Vietnam’s ruling Communist Party started a week-long meeting on Monday, discussion has intensified over the top leadership that will emerge and set the tone for the next five years in the fast-developing Southeast Asian country.

A government statement said the latest plenum would include discussion of “personnel documents” – a euphemism for deciding who holds the most important posts, which will be formally assigned at the Communist Party Congress due in January.

The congress will shape policy five years after General Secretary Nguyen Phu Trong, a party ideologue, emerged to lead an anti-corruption drive after ejecting a former leadership that had closer ties to business.

“No matter who will be elected into the new leadership, there will be more continuity than change, and Vietnam will maintain its current trajectory,” said Le Hong Hiep, a fellow at Singapore’s ISEAS Yusof Ishak Institute.

Trong himself, one of the most powerful Vietnamese politicians in decades, may retain an important role, but questions have been asked over the 76-year-old’s health as he has appeared frail at events in recent months.

During the last congress in 2016, Trong led a move to dispose former prime minister Nguyen Tan Dung. Then in 2018, he inherited the presidential role in addition to his Communist Party chief position after the incumbent president died.

Some of the highest profile scalps to have been claimed by Trong’s anti-corruption crackdown have been allies of the former premier. Most analysts expect the crackdown will continue after the congress.

NO STAND OUT CANDIDATE

Vietnam has no paramount ruler and is officially led by four “pillars”: a president, prime minister, the chief of its Communist Party and the national assembly chair.

In theory, who can ascend to the highest levels of Vietnamese politics is governed by rules and limits on age and origin. There has never been a general secretary who was not from the northern half of Vietnam, for example, and politburo members over the age of 65 should retire.

In reality, the highly secretive process revolves around building a consensus and vying for control of the party’s powerful decision-making politburo. Exceptions to those rules are often therefore granted, especially if a consensus on the top candidates cannot be reached.

Another question surrounds the fate of Prime Minister Nguyen Xuan Phuc, who could fight for a second term or seek to further climb the party ranks.

The 66-year-old has represented Hanoi on the world stage as the face of Vietnam’s many trade deals and pushed for regional multilateralism as chair of the Association of Southeast Asian Nations (ASEAN) this year.

A friendly face to business, Phuc has boosted his economic credentials by keeping Vietnam on track to post GDP growth of 2%-3% this year, despite the catastrophic effects of the COVID-19 pandemic on the global economy.

Phuc has been touted as a potential contender for party chief, but other candidates with closer ties to Trong and Vietnam’s powerful security ministry and military will also be lobbying for the position.

Linh Nguyen, a Singapore-based analyst at risk consultancy Control Risks, said the outcome of this congress will likely be more unpredictable than previous years.

“The main reason is that unlike in previous congresses, we haven’t seen very clearly the figures for top leadership positions this time,” Nguyen said.

“None of the current potential candidates are really standing out, most of them are overage, and we might see more political infighting among different factions closer to the date”.

Bridgerton Stars Reveal the Secret to Their Sex Scenes

Substack co-founder says Facebook and Twitter getting into paid newsletters is a positive thing for writers and the media ecosystem, implores them to go all in (Hamish McKenzie/Substack Blog)